all about Black Storks

there is the right place for links to web pages with interesting informations about black storks (eg youtbe chanels, blogs, ...)
Top

One of the most experienced bird researchers in Latvia, whose object of interest has been the black stork for 40 years. It is important to add that Māris is also one of the most active conservationists in Latvia, playing an important role in preserving forest diversity. He was responsible for the creation of the largest number of microreservations for birds in his country, he is the author of the idea and the driving force behind many of the most important laws for the protection of forests. He has been a member of the Latvian Ornithological Society (LOB) since its inception. For many years he has been very closely monitoring the chemical load in the landscape due to agricultural activity, both since the deep past (70s = use of DDT) and now (pesticides), he even based his own extensive dissertation work, which is very worrying and gives clear answers as to why in Latvia (probably not only there) the number of black storks is slowly approaching zero over time. He is also the author or co-author of many projects, studies and professional articles and books.

edit by Marika-Solo:
1/ User Profile: Carsten Rohde - Blogger.com "I am working for a long time and intensively with Black Storks and Raptors (Lesser Spotted Eagle, White-tailed-Eagle, Honey Buzzard, Montagu's Harrier and Hobby). Specifically I work on the Black Stork in Germany and Israel. There are mainly various Protection- and Ringing-Projects."
2/ Carsten Rohde has also documented Estonian black storks in Israel (also the most famous named Raivo) - information and photos can be found on the blog (also documentation of the dangers posed by nets on ponds in Israel and rescuing black storks in particular)
3/Carsten Rohde (ornithologist - BS expert from Mecklenburg-Western Pomerania, Germany) is also co-author of the book Der Schwarzstorch – Ciconia nigra.
4/ Tóbiás is the most famous Hungarian black storks male from the streamed nest in Gemenc-Keselyűs (stork unfortunately did not return to the nest in the spring 2019 - he was ringed as a chick/pullus in 1999 on the nest in the nearby Bogyiszló area)
Top

(The first Hungarian black stork with beacons, whose entire 12,200 km distance we could trace from the beginning of the autumn migration to the return of spring in 2016-2017) http://gemenczrt.hu/aktualis/gps-jelados-fekete-golyak/

edit by Marika-Solo
- Zoltán wasn't the first black stork from Hungary with transmitter
- there is on the page (link above) also the story of Jenő and Bea, the first two Hungarian BS captured and marked with satellite tag and colour ring (scroll down)
- there is also video with eng tittles "Expedition to find Bea and Jenő" (https://youtu.be/nHPhffupeVw) and here is the report (also photos) http://gemenczrt.hu/wp-content/uploads/ ... 160531.pdf
Top

"The interactive exhibition presents the life of birds, the fauna and flora of the Gemenc forest, with a special focus on the black stork. In addition to the feeding and nesting place, we follow the migration of the black stork, escorting it to Africa, where the 'bird of clouds' is also highly respected."
https://www.feketegolyahaz.hu/ 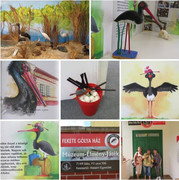 Edit Marika-Solo:
Urmas Sellis is an Estonian ornithologist and nature conservationist, he graduated from the University of Tartu with a degree in biology (project coordinator in Estonian Ornithological Society)
Top

On July 9, 2016, members of the Eagle Conservation Committee in cooperation with the Department of Ecology and Vertebrate Zoology of the University of Lodz and PGL State Forests, for the first time in the history of ornithological research in Poland, set up loggers gps / gsm for black storks. Thanks to these devices, exploring and observing bird migration routes can be a fascinating activity not only for scientists, but also for many people who like to discover the habits and secrets of birds. All flight routes are displayed on the map on an ongoing basis.

Thank you Maria L for the source

btw. it is better to put this info to the other thread - "Movies and videos about black storks"
Top
Post Reply
9 posts • Page 1 of 1